My Life is My Journey

Things to do in Sipora Island is snorkeling, diving and surfing because it has world class surfing points. Hollow Trees and Lance’s Left are at southern end of the island. A number of other famous surf spots are located in northwest of Sipora Island, including Telescopes, Iceland and Scarecrows.

Hollow Trees are also known as HT or Lance’s Right. These cylindrical waves (known as right tubes) have for the past 10 years often appeared in world surfing magazines and videos.

When these waves don’t come too big, there are 3 take-off zones that challenge you to be able to maneuver surfing. When a bigger wave comes, the top of the breaking wave will be connected to the barrel continuously which will make you admire it.

Be careful of what is called the Surgeon Table at this surfing spot; These waves seem to exist to lift the surfers to the top of the waves as if they were a trophy. Hollow Trees is not recommended for beginner surfers because of the wave challenges present for surfing professionals. 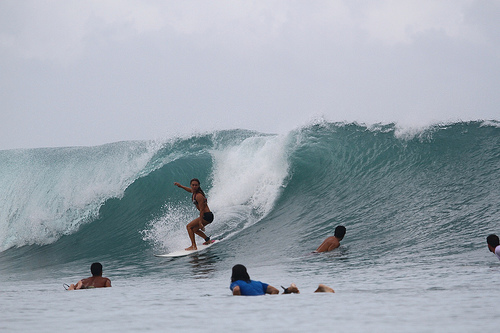 Lance’s Left is the strongest and most consistent type of wave in Sipora Island and surrounding areas. Having the characteristics of waves with two different barrels and a number of take-off zones, Lance’s Left (if supported by perfect conditions) can be one of the most beautiful waves.

Many people refer to and compare Lance’s Left as the Money Trees wave from G-Land Mentawai version. The movement of waves on the surface of the sea due to differences in air pressure and wind (swell) is greater able to create a vertical take-off zone and a perfect barrel. When the waves are not too big, Lance’s Left is suitable for surfers with medium abilities.

In addition to the four surfing spots, there is a famous place to be found in Katiet Village which is on southern tip of Sipora Island. This village is precisely located in Bosua village, which is about 4 hours away by speed boat from Tua Pejat.

You may also like: The Best Place to Learn to Surf in West Java

Katiet Village is famous for its perfect wave rolls with a height reaching 3-4 meters. The beach in this village has relatively many corals, but this doesn’t preclude the surfers’ intention to find the waves. The waves in Katiet Village are very good in early April to December.

Another place to surfing that is well known by the international world is Karang Manjat. The very long waves make it one of the favorite places that often invites tourists.

In addition, Karang Manjat is also a snorkeling and diving tourist location. The waters of Karang Manjat have the best percentage of living corals.

If you want to snorkel, Awera Island is the right choice. The white sandy island and decorated with beautiful coconut trees, which is about 3.5 kilometers from the wharf of the capital of the Mentawai Islands district, Tua Pejat.

Gosong Siasiat is a place for diving, diversity of fish and the beauty of coral reefs. Ghost Pipe Fish, nudibranchs, harlequin shrimp, octopus, sea horses, various types of crabs, turtles, and others can be found in the depths of the sea around Gosong Siasiat.

How to go to Sipora Island

There is an airport on Sipora Island but only for charter flights. The more chosen route to go Sipora Island is by boat or speed boat. The boat will usually go to Siberut Island before continuing the journey to Sipora Island and other islands in the Mentawai Islands.

Boats from Padang to Siberut Island will depart Monday, Wednesday and Thursday. Cruise back to Padang on Tuesday, Thursday, Friday and Saturday.

Mentawai Express serves a speed boat trip of approximately 4 hours drive to Siberut Island. This cruise is available on Thursday; the schedule to return to Padang is on Friday.

Sumber Rezeki Baru serves a trip to Siberut Island (at night) by ferry. Sailing schedules are Monday and Wednesday; the schedule to return to Padang is Tuesday and Thursday. Travel by ferry about 10 hours.

To stay overnight while on Sipora Island, tourists can stay in people’s homes in Tua Pejat. Some other tourists usually also choose to stay on cruise ships that can be rented in Padang.

Hotels, resorts and villas can also be the best choice.